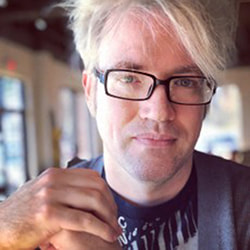 Infected with HIV as a child through the contaminated blood products used to treat his hemophilia, Shawn Decker learned early in life about discrimination. Within a month of testing positive for the virus, he was kicked out of the 6th grade. By all accounts, he wasn’t expected to live five years. After beating the odds and graduating from high school, Shawn opened up about his life, creating one of the first “poz blogs”, describing his life as a twenty-year old dating with HIV. He penned a column for Poz Magazine, entitled “Positoid,” and his first book, My Pet Virus: The True Story of a Rebel Without a Cure, was published by the Penguin Group in 2006.

Since 2000, Shawn and his wife Gwenn have been educating together, using their relationship as a way to talk about the issues of sexual health. By combining humor and candor, they've successfully engaged tens of thousands of college students, and have shared their story with millions of people through Cosmopolitan, MTV, BBC and HBO.