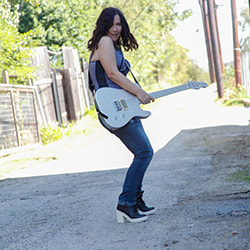 Kathy Valentine has been a working musician and songwriter for over 40 years. She started her first band at age 16 in her hometown of Austin, Texas, then moved to Los Angeles and joined a band that would go on to make music history: The Go-Go’s. Kathy wrote or co-wrote some of the bands most renowned tunes, including the hits “Vacation” and “Head Over Heels.” She returned to Austin in 2006 and began finding new creative pursuits and career opportunities as a public speaker, spokesperson, producer, actor and author.
University of Texas Press, published her memoir All I Ever Wanted in Spring 2020. A soundtrack of original music accompanies the audiobook. The Broadway musical Head Over Heels, based on the Go-Go’s catalog, is currently in regional productions across the country. She put an academic degree plan on hold while finishing and promoting her book, and still finds time to play guitar with the Bluebonnets the all-female rocknroll band she started in Austin.
Kathy’s greatest loves are her daughter, writing, music and travel. Her hobbies are reading, computer graphics, digital recording, social media, politics and natural based health protocols.