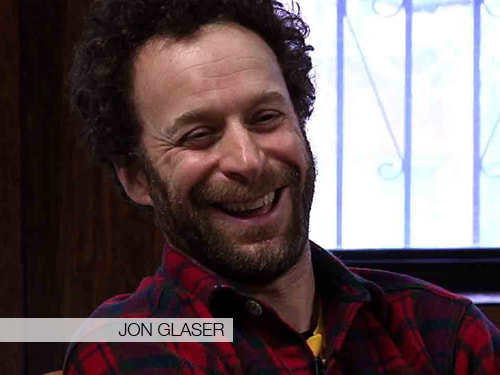 Jon Glaser is an actor, writer, producer and director who created, starred in, and co-wrote the TV shows Delocated, Neon Joe Werewolf Hunter and Jon Glaser Loves Gear. You may or may not recognize him as Councilman Jamm from Parks and Recreation or Laird from Girls. Other TV credits include Inside Amy Schumer, Curb Your Enthusiasm, and Wonder Showzen.  Film credits include Trainwreck, Be Kind Rewind and Pootie Tang.

As a multiple Emmy nominated writer and consultant, Jon's credits include Inside Amy Schumer, Late Night with Conan O'Brien, The Dana Carvey Show, and Cheap Seats. He has written several stories for The New York Times Magazine, and his writing has also appeared in ESPN The Magazine, The Onion A.V. Club and on-line for New York Magazine.  His first book, My Dead Dad Was In ZZ Top, was published by Harper Perennial. He wrote and directed the music video for Bob Mould’s “Star Machine.”