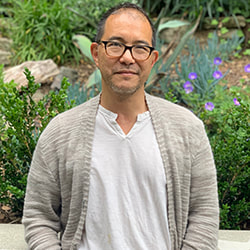 ​James Sie is the author of the YA novel All Kinds of Other. His debut novel, Still Life Las Vegas, was a Lambda Literary Award nominee for Best Gay Fiction. An award-winning playwright, he has had productions performed in Chicago, Los Angeles, New York (Lincoln Center Institute) and across the country. He has contributed essays to The Rumpus and The Advocate.
In addition to writing, James is also a voiceover artist for many cartoons and games, including Jackie Chan Adventures, Stillwater, Kung Fu Panda: Legends of Awesomeness; Final Fantasy VII Remake, and Avatar: The Last Airbender, where his excessive love of cabbages has earned him immortal fame.
James now lives in Los Angeles with his husband and son.