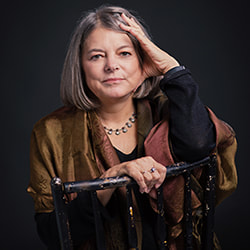 Her next book is Children of Ragnorak, the first novel of the Runestone Duology, based on Norse myth.