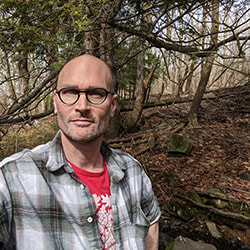 Click image for website
​
​Augusten Burroughs is one of the bestselling memoirists of his generation, with over ten million copies of his books being sold worldwide. His first memoir, Running with Scissors was published in 2002 and chronicled his unconventional, "off the rails" childhood. The book became a film and a publishing phenomenon, spending more than four years on the New York Times bestseller list. Since then he has written four additional bestselling memoirs: Dry, A Wolf at the Table, Lust & Wonder and Toil & Trouble. He is the author of two essay collections, Magical Thinking and Possible Side Effects, as well as a book of funny/horrible holiday stories, You Better Not Cry. He is also the author of This Is How, a self-help book for people who are psychologically ambitious and want to fix themselves. Augusten holds an honorary Doctor of Letters from the Savannah College of Art and Design and is a Lambda Literary Award recipient.
Fives Foxes, a partnership between Augusten and Prive Swiss, the world's #1 luxury 1:1 private treatment center, will open in Connecticut in July 2022. Five Foxes is based on the self-renovation technique Augusten developed over four decades, Focus-Directed Writing.